MEMBER
OF THE YEAR 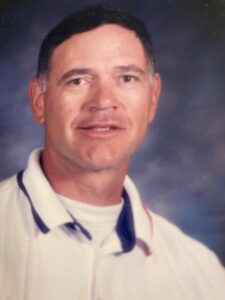 began officiating football and basketball games in 1972.  As his skills improved and developed, it soon became obvious Jerry not only enjoyed being around middle and high school kids in athletic competition but that he possessed such a natural aptitude for officiating, showing an almost unequaled ability to quickly and decisively make correct decisions on the field and court.  It got to be a real pleasure getting to officiate games with Jerry.  He had a lighthearted, jovial way about him that elevated everybody’s comfort level, not just with fellow officials, but also coaches, players, teachers, and athletic directors.  Jerry always showed a genuine interest in you as a partner.  He made sure you knew that you were an important, integral part of the success of the crew in games that night.

Jerry was always very willing to “give back”. He had a real passion for helping new officials improve their skills, and he took great satisfaction in seeing them go on to realize their full potential.  Jerry was humble.  Despite all the success as an official and his rising status amongst peers, he never belittled or patronized, but rather, always encouraged.  He would be the last person to ever look for or expect any much-deserved recognition.  Resolute, cool and composed under pressure, soothing sense of humor, never judgmental or critical, supportive, and genuine friend are some words and phrases describing Jerry.

By the late 1980’s Jerry had developed such a positive rapport with all the high school football and basketball coaches in the area.  So appreciative of his professional approach, they also came to trust his judgment in all game situations.  Jerry was receiving so many recommendations from coaches for post-season play by then that it became a foregone conclusion he would once again be “going all the way” to officiate a 4, 5 or 6A state championship game.  He had garnered so much admiration and respect from all who knew him.  Craig Helser, Wichita Officials Association President, gave him the nickname “Jerry Legend” (defined as “one popularly regarded as historical”).  It was a fitting tribute to one who had accomplished so much in his officiating career.  Jerry had “raised the bar”. He had raised the standard of excellence for area officials. 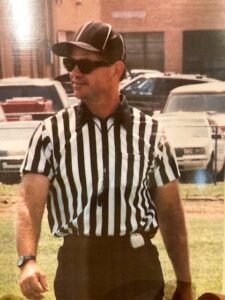 On the evening of January 11, 2000, Jerry stood with his partners at mid-court, getting ready to officiate the second of two varsity basketball games at Goddard High School.  He suddenly collapsed to the floor and died soon thereafter.  This was a tragic loss felt throughout the community and around the state.  It was then that President Helser established The Jerry May Award in Jerry’s honor to make sure his memory would be kept alive for years to come.  This meaningful, highly regarded award has since been given once each year to an official who most exemplifies Jerry’s abilities on the field and court, his lasting contribution as a mentor for new officials, and his exceptional integrity and character.

Jerry was a teacher at College Hill Grade School in Wichita.  They put a memorial with his picture up in front of the school in his memory, along with naming the playground after him.  We also lost his wife in 2021 to cancer, which was sad for his 2 children to lose both parents.

Jerry will always be missed, but by giving this award annually to deserving officials, we continue to celebrate his life. “The Legend” lives on.

GWOA was established to PROMOTE, ENCOURAGE, and PROVIDE a session for personal improvement relating to “GOOD OFFICIATING!” The GWOA endorses all KSHSAA sponsored sports and conducts clinics in both football and basketball. At these clinics, KSHSAA rules and required tests are discussed with answers. In addition, the GWOA assumes the responsibility of recruiting NEW officials to improve the games.